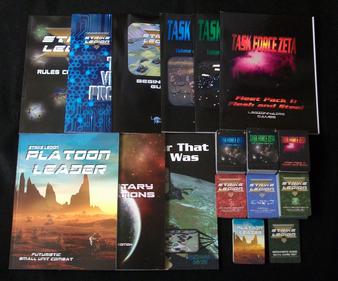 Legionnaire Games is celebrating its 5th birthday this year, and we want to shout out a big THANK YOU to all of the players and customers who have helped us along the way!

To celebrate, we’ll be giving away printed copies of all current (and some future) Strike Legion and Task Force Zeta products to one lucky customer - that’s 9 books and 7 sets of Data Cards, retailing at almost $340.00! The winner will receive the following products:

How YOU can win:

The winner will be drawn randomly from all valid submitted entries, and announced on Monday, May 9th, 2016 on our Facebook page (www.Facebook.com/LegionnaireGames).

Thanks again for a great five years!
(Offer void where prohibited by law. Gaming wholesalers and retailers are specifically excluded from entry. Contest winner is responsible for all taxes, duties and other fees that may be associated with receipt of prizes/gifts (shipping fees excluded - we’re taking care of that). Contest winner should allow 3 to 6 weeks for delivery of prizes after the winner is announced. Total prize value of $338.90 may not be exchanged for cash or other considerations).

That's all for the moment, save that Task Force Zeta and Close Quarters players can look for updated and revised editions of those product lines throughout the year - and maybe a new title or two, depending on how the year develops.